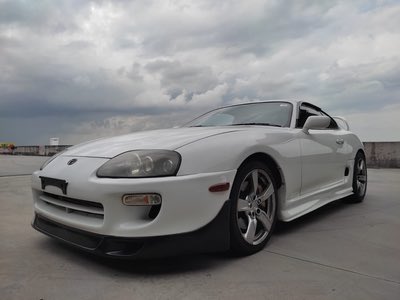 In turbocharged form, Toyota’s sport coupe belongs among the flying machines. The normally aspirated (non-turbo) version itself is no slouch in the performance department. But adding a blower elevates the car onto a plain occupied by but a few.

The rear-drive Supra actually started life as part of the Toyota Celica line, debuting in 1979 as a Celica Supra. It finally was given its own identity in 1986, and a turbocharger was added the next year. But it wasn’t until 1993 that the Supra Turbo entered into the realm of the supercars.

The 1998 model builds on these roots, with performance characteristics that rank among the upper echelon of go-fast vehicles while ensconced amidst the trapping of comfort and convenience.

There are a number of interesting design features about the ’98 Supra Turbo.

In an era when the V configuration is embraced by the majority of six-cylinder motors, the Supra has its six cylinders all in a line. As an in-line 6 instead of a V-6, the engine retains an even firing order.

Rather than utilizing Toyota’s variable valve timing that is applied to the normally aspirated 6, the Turbo uses fixed valve timing and twin sequential turbochargers. The Turbo has so much power that the VVT system isn’t necessary.

The two turbochargers act in sequence, with only one turbo being active during low rpm operation. This uses less exhaust gas energy and improves throttle response when accelerating.

The second turbo comes on line in the middle rpm range, and runs at idle speed at a pre-set exhaust pressure for a smooth transition from primary to secondary turbo. Then both kick in at full boost in the high engine speed range.

So how much does this contribute to power?

Both engines share the same fundamental design parameters of two overhead cams and four valves per cylinder. Something that isn’t shared, however, is the cost.

The Turbo posts rather sparkling 0-60 miles per hour runs of 5.1 seconds and an electronically controlled top speed of 155 mph. Specs for the non-turbo model are not available, but with a dropoff of 95 horses and 95 foot-pounds of torque the pace is going to be quite a bit slower.

It is quite obvious the Supras are drivers’ cars, with a bit of semi-pro to professional touc h recommended for the Turbo model if you are planning on running with the hammer down.

There is a choice of transmissions with the Turbo coupe. Available is a four-speed automatic and a six-speed manual. The normally aspirated comes with just the automatic.

The automatic is electronically controlled with a manual shift mode that permits faster shifting than letting the unit do it itself. For a slam-bang style of driving that calls for going down through the gears, as well as up, the six-speed is the gearbox of choice.

In getting the power out to the back end, the Turbo is equipped with a torque-sensing limited slip differential to minimize wheel slip.

The standard Supra has limited slip, but it’s of the conventional clutch-pack type.

Both models have four-wheel independent suspension, but the Turbo has upgraded disc brakes with four calipers in front and two in the back versus two in front and a single caliper in the rear for the Supra.

The cockpit layout basically is the same for both cars, with the Turbo being upgraded with power seats and leather seating as standard.

This model offers a mix of world class performance and luxurious comfort.