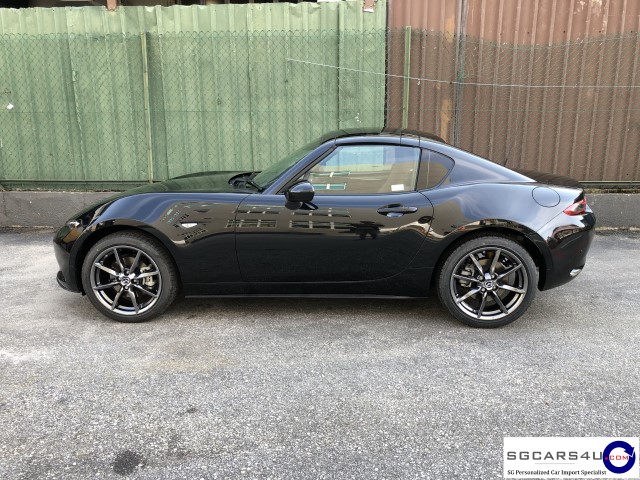 The Mazda MX-5 RF (Retractable Fastback) delivers all the thrills of the regular MX-5, but with a bit more style. What’s more, the Targa-like roof arrangement doesn’t mean you lose a lot in the way of open-air thrills. Wind noise with the roof up is much improved over the soft-top convertible, although there's still quite a lot of it, even at moderate speeds. But it’s still a very appealing car in a number of other areas.

You have the choice of two engines – there’s a four-cylinder, 132hp 1.5-litre unit or a 184hp 2.0-litre engine powers the top-of-the-range models. The 1.5’s power output may sound very modest for a modern sports car, but in such a light car it still offers sprightly performance. Whichever engine you go for, the Mazda MX-5’s manual gearshift is brilliant, offering short, light and positive shifts. There’s the option of a six-speed automatic gearbox, but it isn’t worth it unless absolutely necessary because you’ll want to be as involved in the driving as possible when it’s this good.

Both engines are impressively frugal given the MX-5’s sporting intent – the 1.5 offering an official combined figure of around 45mpg and the 2.0 not much worse at 41mpg. In both cars, achieving an mpg figure in the high 30s is easy stuff in the real world.

Although the Mazda MX-5 RF weighs slightly more than the standard car, there’s very little between them in how they feel to drive. The MX-5’s steering is now an electrically assisted setup but it’s still really good, being quick but feeling naturally weighted, and communicating the necessary information to give the driver confidence.

Unlike the 1.5, the 2.0 model comes a limited slip differential for better deployment of power through corners, while Sport Nav+ models get stiffer sports suspension. As such, the 1.5 rolls a little more as it barrels through bends, but never to the extent that it detriments the driving experience.

Roof-up, the Mazda MX-5 RF is quieter on the move than its cloth-roofed stablemate, while with it down the two passengers onboard are well sheltered from buffeting, even at 70mph. Putting the roof down in the cloth-roof car requires unclipping it at the top of the windscreen and simply pushing it back behind you until it locks down with a click. In the RF, you simply flick a switch on the dashboard – much easier.